The cacao for the Dick Taylor Solomon Islands bar is single origin but also single estate from a man named Kenny Patovaki on the island of Paspaskato. Dick Taylor had already gone to the Solomon Islands in hopes of finding that cacao could grow there and then to ensure it consistently grew year after year. Kenny sent Dick Taylor some samples of the cacao he had grown and they fell in love with it. It’s because of Kenny’s ability to produce great tasting cacao that Dick Taylor used his beans to make this bar. You can read more of the story here.

Adam Dick of Dick Taylor described the flavor of cocoa from the Solomon Islands as bright and fruity. The description of this specific bar on Dick Taylor’s website includes cherry, almond butter and apricot as the aroma, flavor and finish respectively.

The bar smelled more citrusy to me, but the flavor of cherry first hit my tongue. Some astringency developed as my bite melted as well as a citrus and walnut-like flavors. The texture was chewy and chalky at the same time since the bar had bloomed in transit. My bite ended with nuttiness, citrus and lingering astringency. If you want to hear another person’s thoughts, Victoria Cooksey, fellow blogger and chocoholic, also tried this bar.

Dick Taylor: Made in Eureka, California 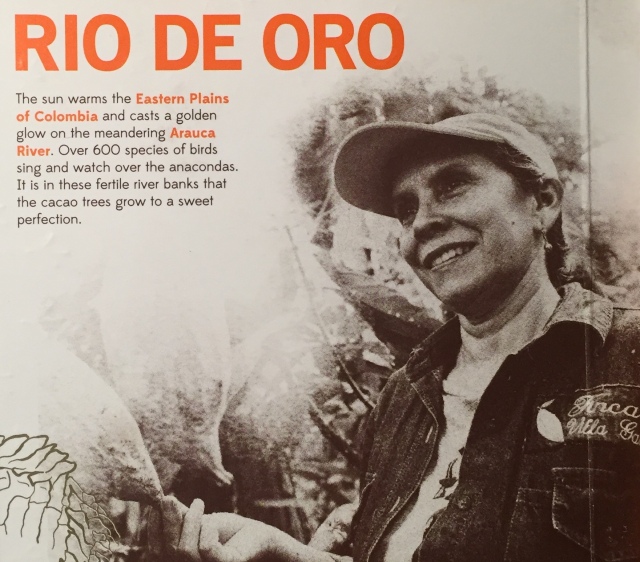 The Cacao Hunters only use cacao from Colombia (you can see a map here showing the various parts they source from) and this bar is made with cacao from the Eastern Plains of Colombia along the Arauca river (listed as #5 on the map). Carlos Velasco founded the company with the goal of working with local farmers to identify and protect the different types of native cocoa in their country.

The flavor notes are listed as honey, cashew and mandarin. The scent was amazing from this bar. It was just like sniffing a mandarin orange! The flavor of honey developed as my bite melted as well as blackberry. I ended up having to chomp on this chocolate since it was taking a very long time to melt and the flavor started to remind me of Tootsie Rolls. Astringency developed at the end with nuttiness.

Even though both bars had badly bloomed, but they were still worth trying! Normally I would share the leftovers with my coworkers, but these bars are small and I’m going to do my best to finish them on my own.

Cacao Hunters: Made in Colombia