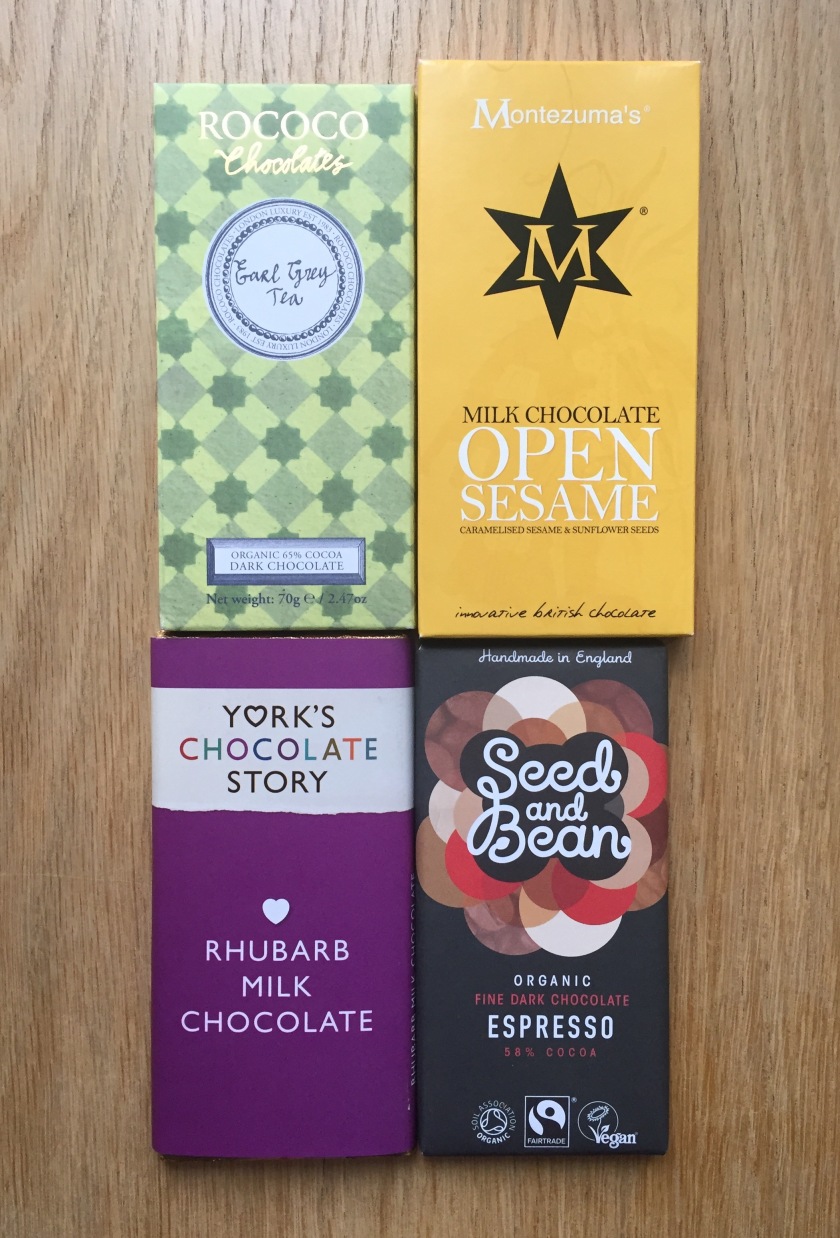 When in England, trying locally made chocolate is always a must! I recently travelled with my boyfriend and his martial arts classmates to a couple of cities where I knew chocolate would be found. I’m not talking about Cadbury, though. I’m talking about other brands that I either hadn’t heard of prior to the trip. I’m not even sure if I’d be able to find any of these brands in the States.

These four bars I picked up at York Chocolate Story while spending a day in York, which is a beautiful town if you get the chance to go by there. York Chocolate Story offers tours including the story of how cocoa came to British shores, but I didn’t have time to attend. Instead I went straight to their chocolate bar selection and took a while to decide which bars to take home.

It was hard to choose only four since there was a large variety. It was interesting that there were several rose and lime options compared to any other flavor available. In the States, rose and lime are hard to find. Looking back, I should have grabbed a bar with lime in it, but I didn’t think of that while feeling rushed for time. 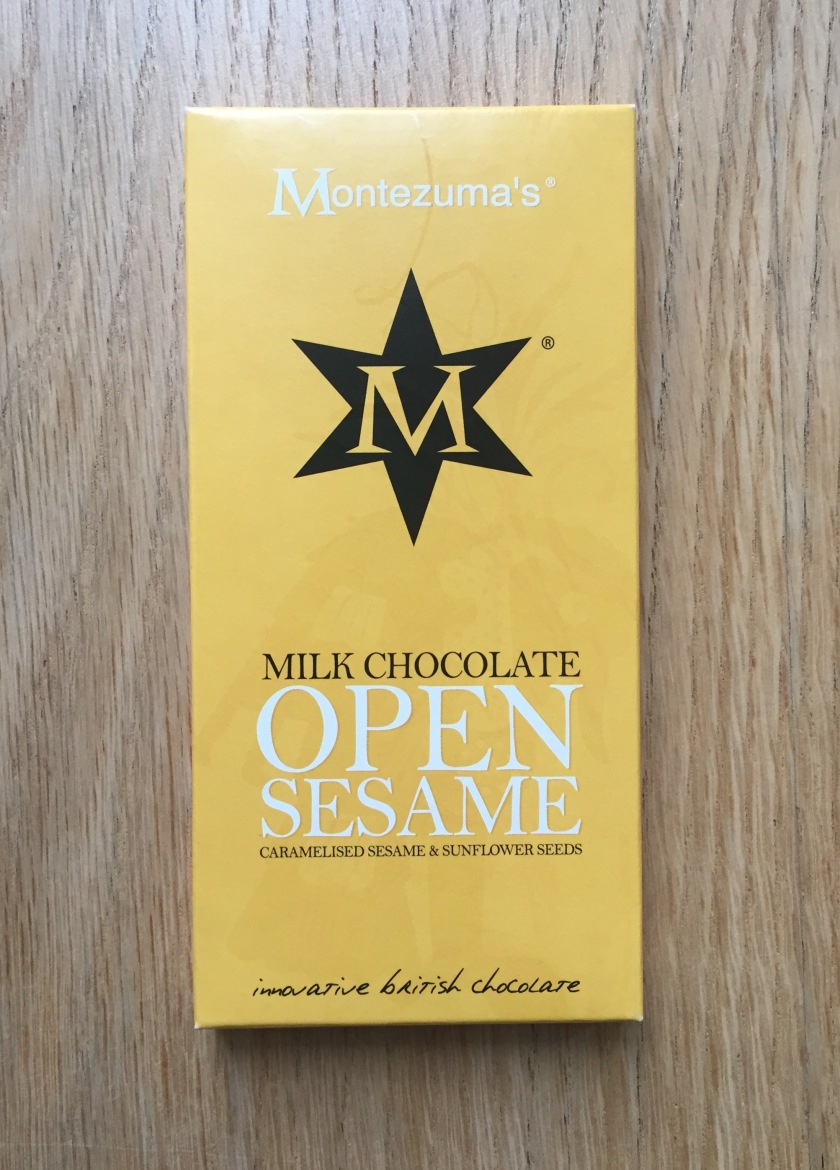 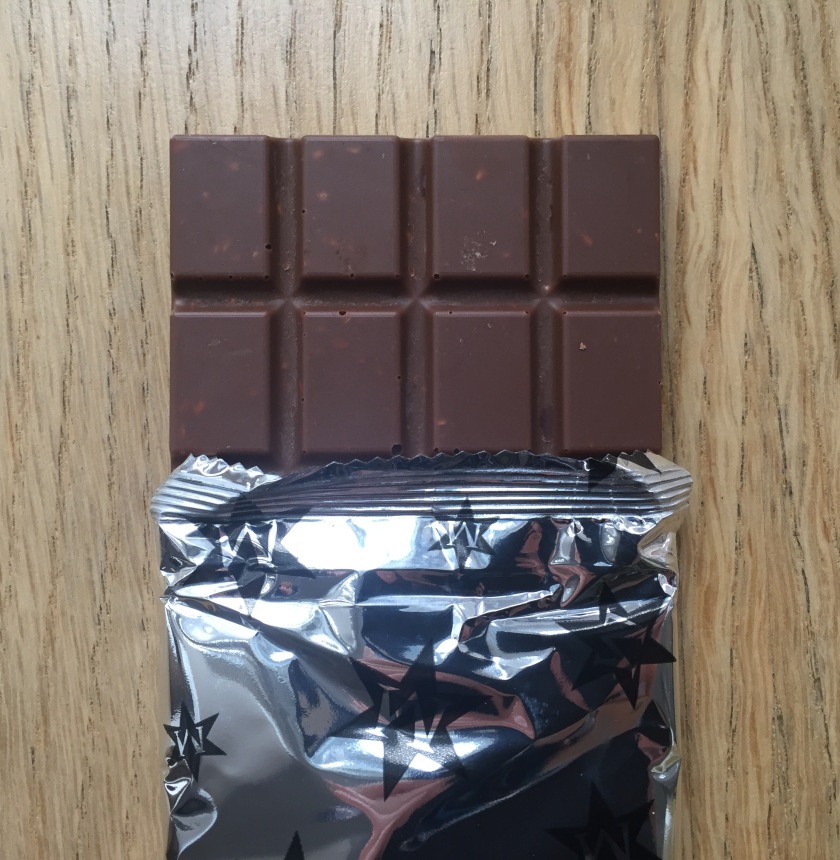 I grabbed this bar because sesame is one of my favorite flavors. This bar had a creamy, nutty scent. The scent along with the bright yellow packaging reminded me of summer evenings when I lived in New Jersey. It’s funny how scent can bring back random memories 🙂 During my trip abroad, I finally had the chance to start reading Simran Sethi’s book “Bread, Wine, Chocolate: The Slow Loss of Foods We Love,” where she says when savoring a food or drink, allow memories to come to you as it’s part of the experience. The flavor was creamy, sweet, nutty and savory. The sunflower seeds scattered inside of the bar gave a light, crunchy texture. I really liked it!

Made in West Sussex, UK. 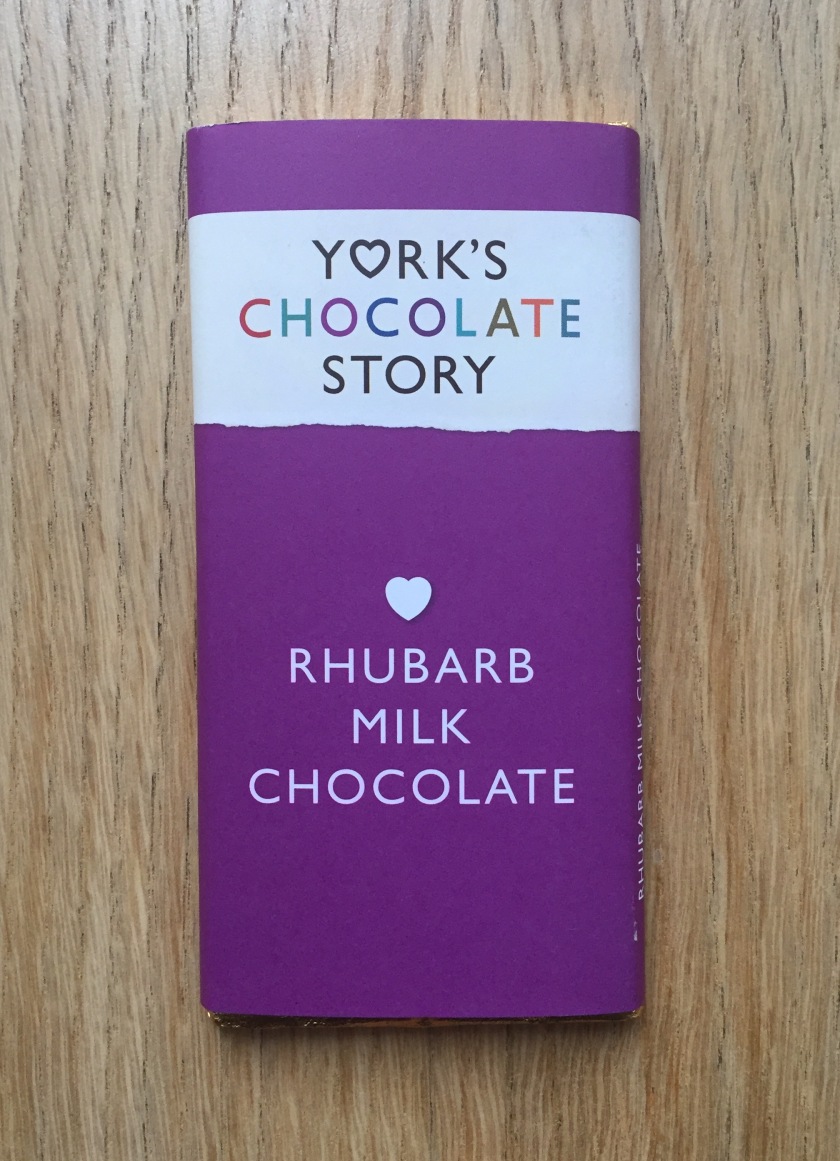 Inspired by Trish from Eating the Chocolate Alphabet mentioning that she wanted to try rhubarb in chocolate before, I figured it was worth trying. The bar had a sharp vegetable-like scent. The rhubarb flavor wasn’t as strong as I anticipated. It was present, but not overwhelming. The chocolate itself was smooth and creamy. If you’ve had strawberry rhubarb pie, you would know the kind of scent and flavors I’m talking about. I’m pleasantly surprised at how this bar turned out and I’m glad it’s in milk chocolate since the sharp tartness of rhubarb I imagine could be potentially overwhelming if it were in dark chocolate. The creaminess of the milk chocolate seemed to help counter that tartness.

Made in Kings Square, York, UK. 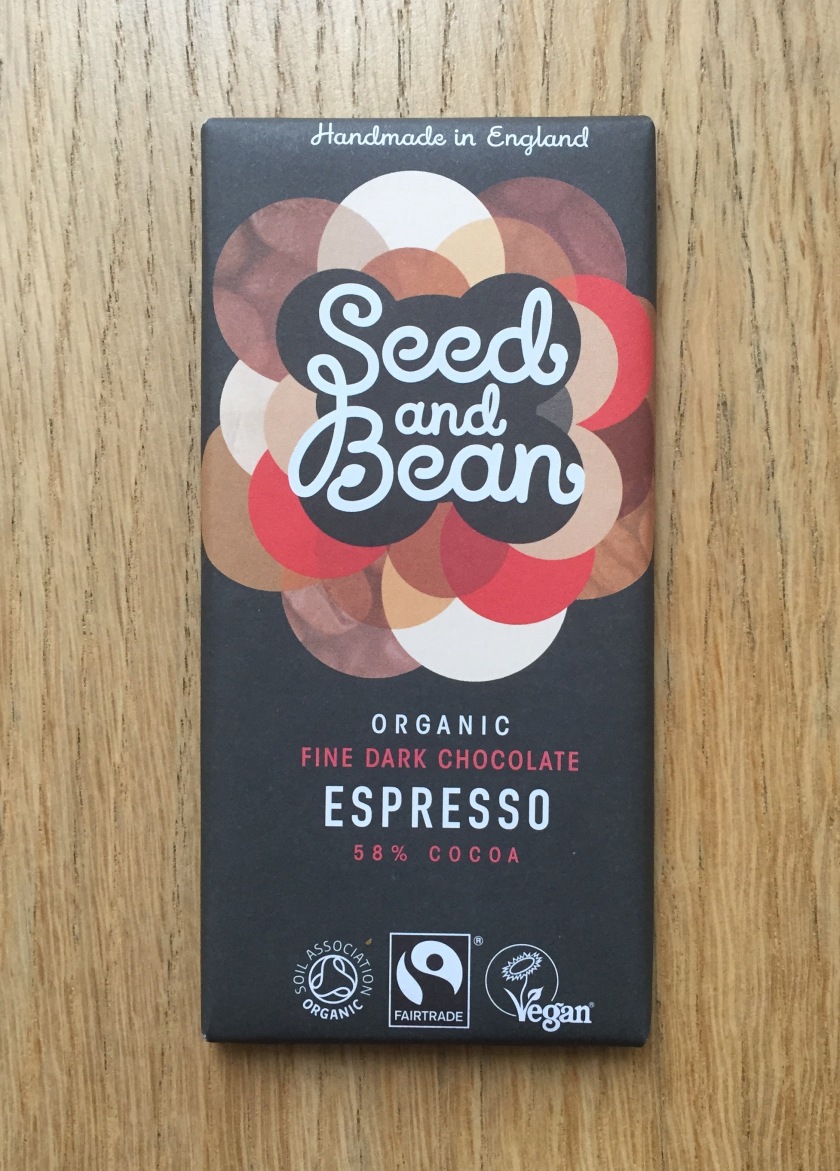 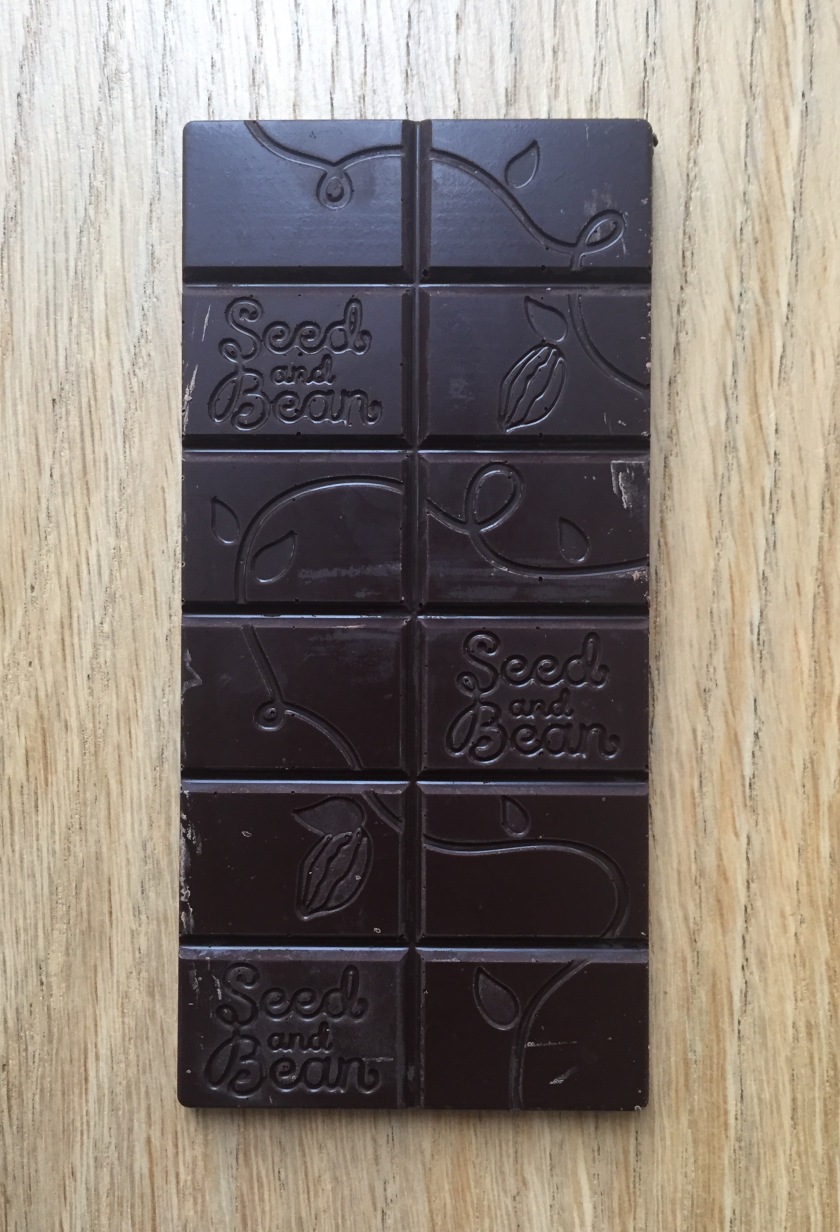 I grabbed this bar since coffee in chocolate (bars, specially) doesn’t seem to be that common, which makes me sad. Coffee and chocolate go so well together and have similar origins and processes in being prepared for consumption. I couldn’t pass up this coffee + chocolate combination and I hadn’t heard of Seed and Bean before. The back of the bar said that the chocolate was made using Trinitario cacao from Domincan Republic. The cacao was obtained through The Ethical Company Organization, which is a British company since to apply for their accreditation, companies must pay a fee in pounds.

The bar smelled roasted and bitter. The chocolate first tasted like coffee and was mellower in flavor compared to the aroma. I couldn’t really taste the chocolate itself. The coffee seemed to turn fruity in flavor and then into what reminded me of peanut butter. It’s not the first time I’ve tasted some kind of nut butter in a coffee and chocolate bar, which others I’ve mentioned this to have thought it strange, as do I, but I like it! That nut butter flavor lingered into the aftertaste. This is another coffee + chocolate bar that I liked!

Made in Corby, UK. 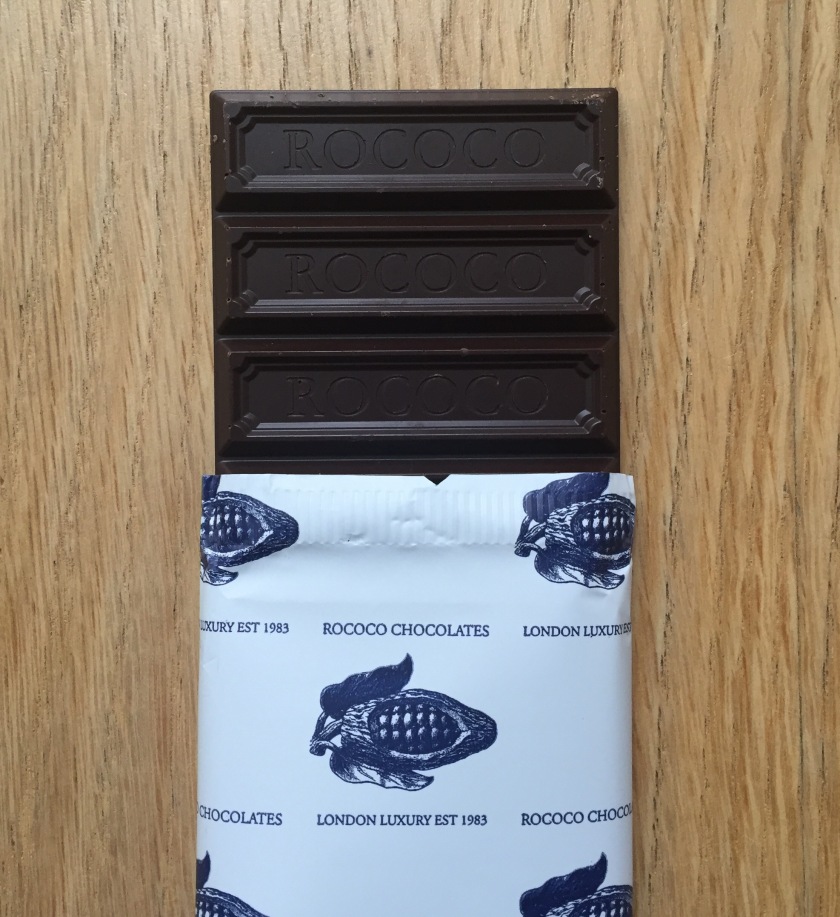 We’re finishing up with Rococo, which I’ve tried before, though that time I had tried a Christmas-themed bar and this time I’m trying an all-year-around type of bar with earl grey tea. I had heard that the English were serious about their tea, and it wasn’t until I visited England for the first time that I learned yes, they truly are serious. We mostly saw the Tetley kind of tea being served. Usually we would drink green tea since normally in the States there would be a selection to choose from, but we made an exception and appreciated what was available locally.

The back of the bar says that ground tea was added to this bar lending it an “unusual” texture and that the lemon notes are due to citrus bergamia essential oil. The citrus scent was more obvious than the scent of tea. Opposite to the scent of the bar, the mildly bitter flavor of the tea was easily detectable compared to the subtle citrus flavor. The bar did have a slightly crunchy texture due to the ground up tea. I could imagine myself enjoying a cup of earl grey tea minus the milk and sugar but with a spritz of lemon juice and some dark cocoa added. I’m not new to savoring tea in chocolate, but this was a new experience having tea with citrus flavoring!

Made in London, UK.

If you know of any chocolate bars made in the United Kingdom that you like, share in the comments below! I would love to visit the U.K. again sometime and maybe I’ll be better prepared for the cooler temperatures we experienced if I go again during the spring 🙂