Because my parents are currently living in Utah, I wanted to cover that state for my 50 States collaboration with Trish. I’ve tried several of Durci’s bars, and I’ve tried Amano once, but I had never had Solstice before.

Utah has a nice handful of chocolate makers, and I’ve heard somewhere that because the air is dryer, it’s an ideal environment for making chocolate. I know that water causes chocolate to seize, but I can’t say I know if a humid state, such as Florida, would be considered the worse place to make chocolate. Otherwise, I know that Utahans love good food as much as everyone else, and they are lucky to have several local options to choose from for good chocolate!

Starting with the Amano bars, I like how both bars came in a plastic wrapper that ensured freshness. There was even a clear panel on the back so you get a preview of what you’re about to enjoy. 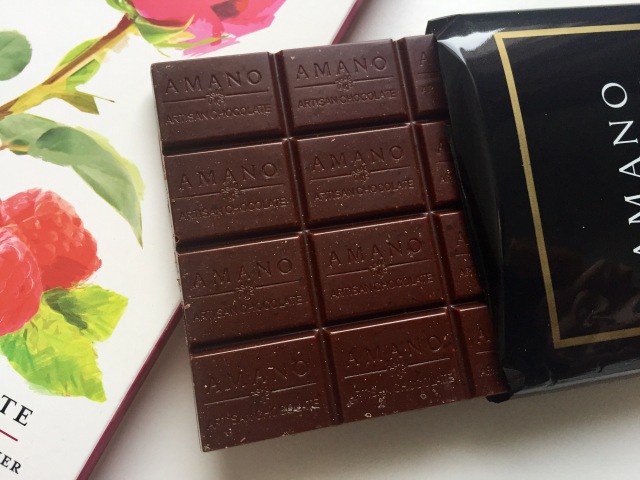 The raspberry rose bar had a story on the back of the packaging mentioning that Art had visited a pastry shop in Paris by Pierre Hermé and bought $70-worth of pastries to take back to his hotel room. I’m taking a moment to pause here… when I go to Paul’s Bakery or any type of French-style bakery, I usually end up “accidentally” walking out with a box of pastries. $70 is a LOT more than how much I spend! Anyway, when he tasted Pierre Hermé’s raspberry rose cheesecake, he was so impressed by its flavor that he wanted to make a chocolate bar that paid homage to that cheesecake experience. His goal is that his chocolates would impress his consumers that same way.

I could smell a chocolatey, raspberry and a very light floral scent (obviously from the rose). My taste buds were immediately hit with the sweetness and fruity raspberry flavor. The rose flavor developed more as my bite melted, though it was a light rose flavor. Raspberry remained as the dominant flavor throughout my bite with rose in the background. There were crunchy bits inside of the chocolate that gave a nice, light texture to the bar. This was a very pleasant chocolate and perfect for spring! I would definitely want to get this bar again! The raspberry flavor was so delicious, like eating a danish with berry jelly filling on top. With my second bite, the rose was more obvious toward the end but still not strong enough to match the raspberry flavor. I could not taste the vanilla at all despite there being whole vanilla beans present. 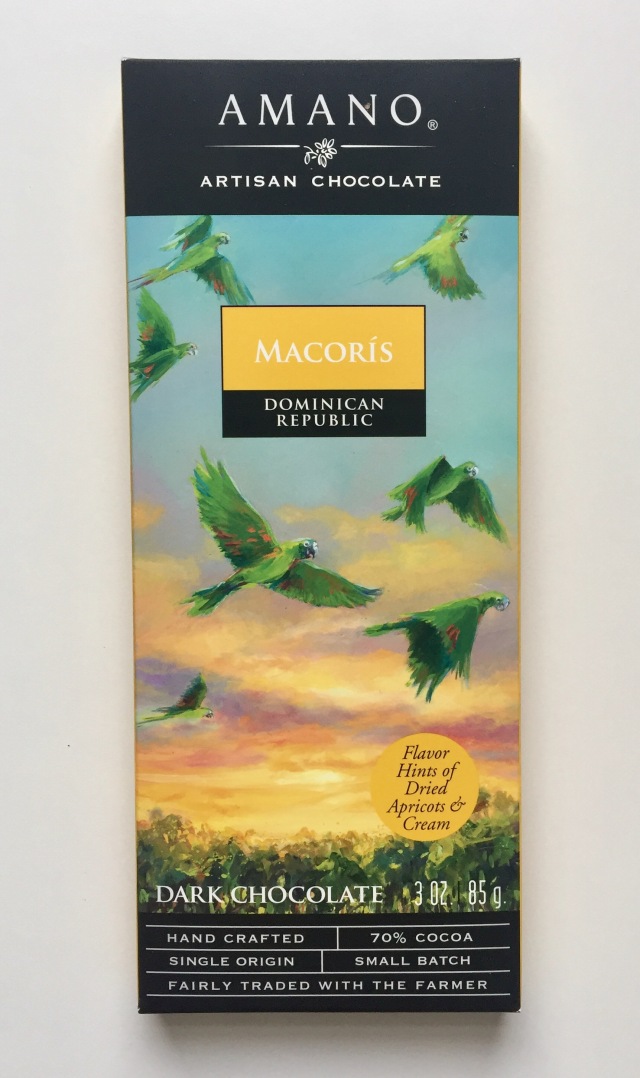 On the back of the Macorís – Dominican Republic package, Art tells another story. This time he’s at a cocoa plantation and he admires the beauty of the trees, hears the chirping of the birds and feels at peace. He compares the beauty of the experience to the Garden of Eden. He wanted to some day make chocolate using the cacao from that plantation and his dream came true seven years later.

The tasting notes were listed as molasses, brown sugar, cream, nuts and dried apricot. This smelled like dried apricots and brown sugar. The scent was deep and rich. I took some time to enjoy the aroma. The flavor of apricots, molasses and brown sugar filled my mouth at first. Halfway through my bite the cream and nutty flavors were subtle. The nutty and cream flavors lingered in the aftertaste. Such a delicious bar! I had a couple of coworkers try this bar too. One of them only tasted apricots while the other only tasted nuttiness. This bar also contained whole vanilla beans, but I did not taste the vanilla.

Both bars definitely provided rich experiences in scent and flavor. I’ll be trying more Amano in the future!

Amano: Made in Orem, UT 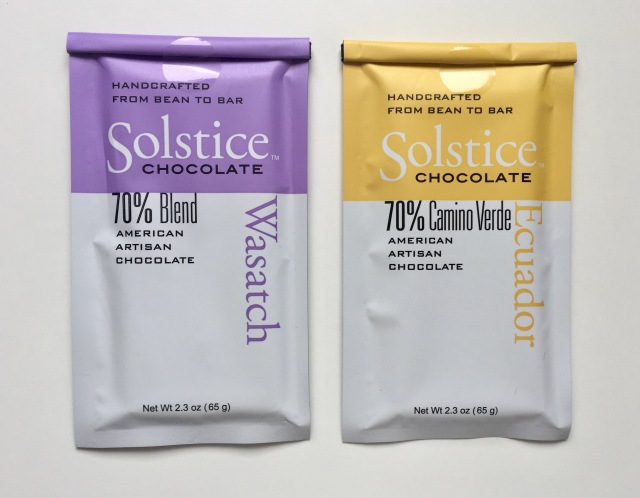 This is my first time trying Solstice, and I’m super excited! I had seen them on Instagram and at The Chocolate House in D.C., but I had yet to pick up a bar for myself.

I liked how the bags that hold the Solstice chocolate is a roll-down-and-pin-closed style. It’s like when you buy bags of coffee and there’s that flexible plastic clip already attached to the bag for you. I wish more chocolate makers would have resealable packaging so the chocolate remains fresh.

The chocolate maker, Durci, is based around the Wasatch mountain range near Salt Lake City. I remember for Mother’s Day ordering a package of their chocolate to be delivered to my parents’ home. For this upcoming Mother’s Day, I’ll have to order some Solstice for my mom! According to the packaging, Solstice also calls the beautiful Wasatch mountains their home and the bar gets it name from them.

The description on the back of the packaging says that the chocolate is “both mild and exciting with an essence of cream and subtle, sweet spice.” The bar only contains cacao, cane sugar and cocoa butter.

The chocolate had a faint spicy smell that reminded me of Undone Chocolate’s cinnamon, cardamom and chili bar. Immediately my taste buds detected that light spice, but just like the description on the packaging, it was subtle. My boyfriend tried this bar and said it tasted lighter in flavor to him. I really liked this bar! Throughout my bite I just tasted that subtle spiciness. A coworker who doesn’t like dark chocolate hesitantly tried this bar but enjoyed it!

The back of the package explains that Camino Verde is a farm in the southern part of Ecuador. The chocolate has tasting notes of brown sugar, caramel, banana and cream. I could smell some fruitiness (banana), hints of caramel and sweetness of brown sugar. My mouth was filled with a mixture of banana, caramel and brown sugar. There was a touch of astringency to the chocolate and the banana flavor grew in strength as my bite melted. The caramel and brown sugar flavors were subtle. The brown sugar flavor was more obvious at the end. I need to have one of my friends try this bar because he almost always tastes banana in dark chocolate made with cacao from South America.

I also enjoyed both of the Solstice bars! With the exception of The Conspiracy Chocolate, I have liked all the other chocolate makers based out of Utah!

Other chocolate makers in Utah:

Don’t forget to check out which state Trish will be covering next at Eating the Chocolate Alphabet!