These Violet Sky bars are courtesy of Trish from Eating the Chocolate Alphabet! We’ve shared chocolate across the country a couple of times now and it’s always exciting to receive new bars to try from a fellow chocoholic and blogger!

Violet Sky was started in 2014 by Hans Westerink. He wanted to make his own chocolate because he enjoys “real flavors” and wanted to share those flavors with other people. He made his own truffles for some time but was inspired by the Mast Brothers to make his own craft chocolate. You can read his personal thoughts on making chocolate here. I like how he says he would rather enjoy chocolate when he knows the farmers and workers were treated well and paid a fair wage.

Hans originally created his bars in his parents’ home despite having his own residence because he was able to use their kitchen and basement, though he was in the process of creating his own commercial kitchen during the time of this interview. Both the people involved with the interview and my fellow blogger, Trish, were amazed with the inclusions used in Violet Sky bars because they’re so unique. Check out what bars Trish tried and read her thoughts here.

Before even trying the bars, I was impressed by the wrappers. When looking at the pictures from Eating the Chocolate Alphabet and the bars I tried, the wrapping is different for each bar as opposed to most places where a similar design and appearance is used. The paper has a nice texture and it makes me wonder if it’s recycled. Personally I think this adds to Violet Sky being unique. 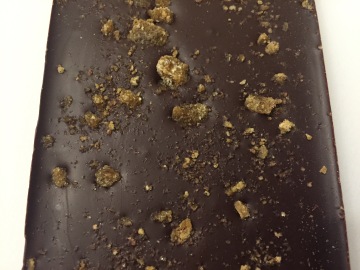 The Maple & Vanilla bar had chunks of what looked might have been maple sugar on the back. I could smell the sweetness of the maple from this bar. With the sugar side down on my tongue I could take the sweet maple flavoring followed by vanilla. Tartness of citrus and nutty flavors developed as my bite melted and remained through the aftertaste. 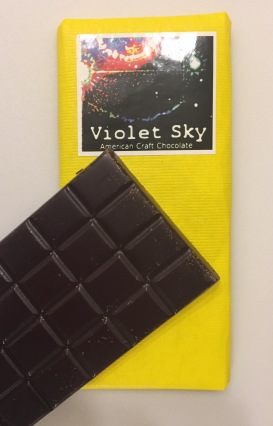 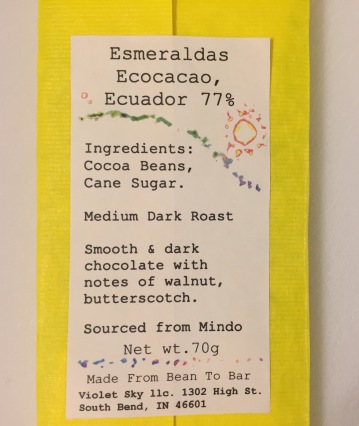 The tasting notes for the Ecuador 77% bar were listed as walnut and butterscotch. The bar smelled faintly of nuts but I tasted earthiness with a touch of walnuts. Some bitterness came through as my bite melted, but I didn’t taste any butterscotch.

The Maple & Vanilla bar was my favorite out of the two. I recently saw on Instagram a photo of a Blueberries and Flowers bar by Violet Sky that sounded intriguing! I’m definitely curious as to what other combinations they’ll come out with in the future!

Make sure to check out Eating the Chocolate Alphabet to see which state Trish will be covering next!