Brasstown was the only chocolate maker I was immediately aware of, but I can now say I’ve had Videri and French Broad!

Starting with Videri, these bars I received through a Cocoa Couriers chocolate subscription boxes and I was pleasantly surprised to receive both a dark and a dark milk bar. While my taste buds are having a preference for dark chocolate, I still like the creaminess in dark milk bars. If you’re not familiar with dark milk bars, I personally didn’t see them trending until 2016, so it’s okay. I’m starting to see more and more of them, and I recommend them for anyone who wants to start adjusting their palate from appreciating just milk chocolate to dark chocolate.

The story behind Videri, according to their website, it crazy simple. Once one man “sunk his hands into a bag of cocoa beans,” the chocolate making bug bit him and he wanted to start his own business making chocolate. His wife and a close friend joined him in his dream and they have continued leading the company as a team. I like how all three of them share their favorite Videri chocolate bar, coffee, hangout place and TV show or book.

The 70% dark bar smelled sweet and nutty. The ingredients list contained only cocoa nibs, cane sugar and cocoa butter.  The texture was very smooth and the chocolate tasted nutty at first but then developed into a bright citrus flavor. Low level citrusy notes remained until the end of my bite as the chocolate easily melted on my tongue and lingered in the aftertaste.

The 55% dark milk bar smelled sweeter and creamy and maybe a bit fruity. The ingredients list contained cocoa nibs, cane sugar, dry whole milk an cocoa butter. Once the chocolate was on my tongue, it tasted slightly astringent and like a light fruity flavor that reminded me of grapes. The texture was also very smooth and the chocolate melted easily. I could taste creaminess from the milk as well. As my bite melted, the flavor of creaminess and like milk chocolate took over my taste buds. The creamy, milk flavor lingered in the aftertaste. In a way this chocolate tasted a little sour to me like goat milk in chocolate, but more subtle.

While the dark milk will be easy for me to eat up really quickly because it’s sweeter and I have a huge sweet tooth, I actually liked the 70% dark chocolate better. I felt like I savored and relished it more for some reason.

For Christmas, my brother-in-law’s brother scoured Time To Eat Chocolate to see if there was anything I had yet to try. Kudos to him for taking the time and having the patience to go through all of my posts! His efforts are greatly appreciated and now French Broad is included in the 50 States project! I had definitely heard of French Broad, but I had yet to try them for myself.

Trish, who I’m collaborating with the for covering the 50 States of chocolate makers, wrote her own review last summer on French Broad’s 70% Peru bar, and I already liked the storybook style describing how French Broad was started.

Chapter 1 starts with how the makers of French Broad met and how their journey brought them to North Carolina. I would repeat it here, but just like people don’t recite an entire book when recommending it, I say just get the chocolate so you can read the story for yourself 😉 But I will share that the back of the bar mentions the French Broad river is what runs from the mountains  near Asheville, NC, and supposedly carries the same water that goes into their cacao trees, though I’m not sure how they tracked that since their cacao is in Costa Rica and Google says the French Broad flows into Tennessee connecting with the Tennessee River.

The little booklet included with the bars Chapter 2, 3 and 4 covers more about the story behind French Broad as well, tasting notes for the bar and how to savor the bar. 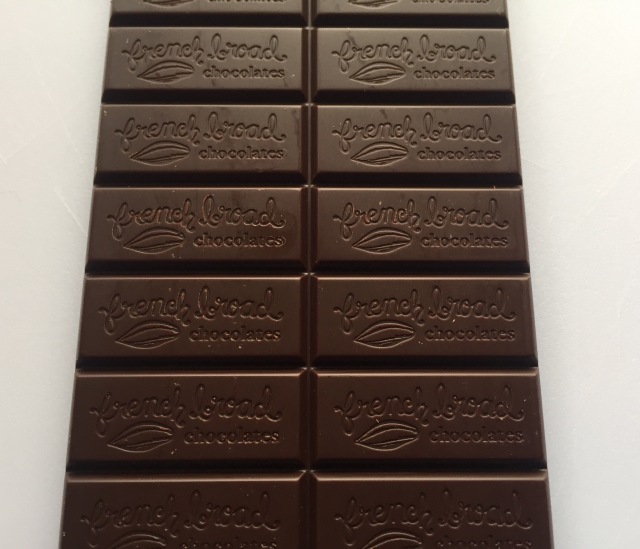 I love that the ingredients for the Costa Rica 80% bar are simply cacao and sugar. The little booklet with the tasting notes mentioned that the bar would smell earthy and taste like a wafer cookie, then develop into tart raspberry. The bar did smell earthy and a bit like raspberries. On my tongue, I tasted tart raspberries first with a background flavor like what you’d get as an aftertaste from eating a wafer cookie. The raspberry flavor remained dominant throughout my bite as it melted with some earthy flavors developing halfway through. 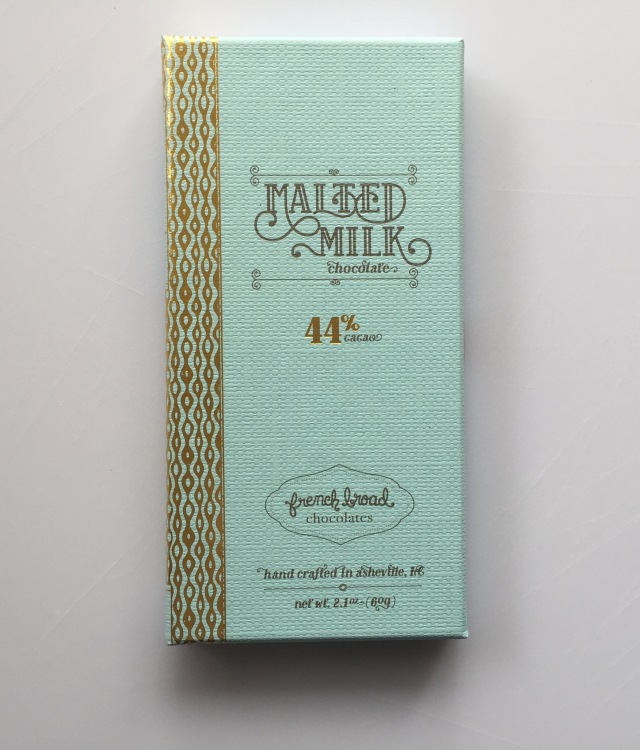 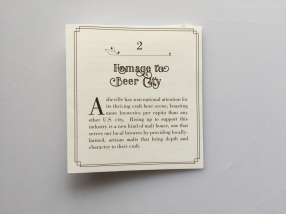 The malted milk bar had the same story inside of the box as the Costa Rica 80% bar, but the booklet talked about Asheville having the most breweries than any other American city and that they have a malt house. The malt house makes malts to support all of the breweries and provide a variety of flavors in their craft brewing world. Malt means to take a barley or grain and steep, germinate or dry it for brewing. The starch in barley prevents it from being fermented into alcohol. Malted milk means taking that malted barley or grain and mix it with milk powder. The ingredients for this bar list: cacao, sugar, cocoa butter, non-fat dry milk, malted barley flour, and “butter (milk)”.

The bar smelled creamy and a bit like beer with a barley/malt scent (it’s not a hops scent). On my tongue I tasted a stronger malt than creamy flavor. The malt flavor remained throughout my bite, which didn’t last for very long as the chocolate melted very easily and quickly. Since I’m not a beer enthusiast, I can’t say I’d jump to get another of these bars, but the malt flavor was easy to detect and I can see people who are into craft brews appreciating it. I’m going to be sharing this bar with milk chocolate-loving coworkers that also appreciate beer to get their take.

Don’t forget to check back on Trish’s blog, Eating the Chocolate Alphabet, to see what state and chocolate maker she’ll be covering next!

Videri: Made in Raleigh, NC

French Broad: Made in Asheville, NC

Other chocolate makers/bean-to-bar in North Carolina: