When a dear friend went to visit Canada, they gave me this bar as a souvenir. I hadn’t tried chocolate from Canada before, and I hadn’t heard of icewine either…

According to some Google searches, icewine is made from frozen grapes. There is little time to pick the grapes as they must be frozen while still attached to the vine and picked early in the morning while they’re still frozen. Because the grapes are frozen (ie. the water in them is now ice), when they are pressed they release a very small, concentrated amount of flavor. Icewine is considered a dessert wine that is sweet with high acidity. About 75% of icewine made in Canada come from Ontario, which also happens to be the place this bar of chocolate came from.

Now, admittedly and honestly, I don’t like wine. It’s too bitter to my tastes. Go ahead and gasp. I used to be okay with drinking red wine, I never liked white wine, but after a long period of not consuming any alcoholic drinks, my taste buds would no longer tolerate alcoholic drinks. This is slowly being “fixed” by my boyfriend who comes from a strong Catholic background and enjoys tasting German beer, wine, whiskey, gin, scotch and bourbon. In fact, his side hobby of tasting has been great help when he’s trying chocolate with me as his taste buds are more sensitive and used to looking for small details and notes. My taste buds on the other hand, need a lot of work and might never be the same. So with this icewine, I wasn’t sure what to expect and whether I’d like it all. 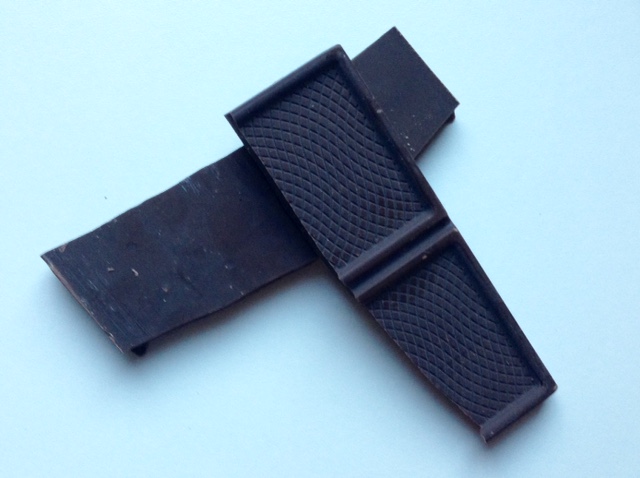 Sadly, what I thought came true. I did not like this bar. It smelled tart, grapes and wine. It didn’t break apart very well, unfortunately. The texture was brittle and my mouth was immediately filled with bitterness and tartness mingled with grape flavors. Someone with a liking to wine might like it and appreciate it more than I did. I ended up having to throw out this bar. Sorry, Canada True 😦

Well, this post is going to be major disappointment because I’m combining two chocolate brands I did not like at all. But here goes…

I found Double Premium Confections near the cash register at a local produce store in northern Virginia. The picture of the two cats caught my eye, since I love cats (you can see pictures of my boyfriend’s and my cat Choco on Instagram and Facebook). When I saw that the bars were made in Arlington, VA, I knew I had to try them. One of my goals with this blog is to bring attention to local chocolate makers, shops and chocolatiers, right? I have to be really blunt and honest, these guys won’t be on my list unless I’m convinced otherwise.

The chocolate had a soft break and it smelled sweet and “chocolatey”. It tasted like bittersweet dirt. It was like the company took melted down chocolate that was originally sweet and purposefully tried to make it bitter to fit their label of the chocolate being 85% “ultra” dark. Those of us who have tried craft and fine chocolate know that 85% can be bitter, but not as though chemicals or additives were added to recreate that bitterness. I forgot to look at the ingredients list before handing it to my coworkers to consume (my dark secret of getting rid of unwanted chocolate), but it’s no longer listed on the website either. Hmm….

Unfortunately the hazelnut bar was no better. The hazelnuts were the best part of the bar. And this combination isn’t even listed on the website either… I think Double Premium Confections knows something about this and decided to sell the chocolate anyway.

Okay, I’m done with the disappointment. Something better will come along next, I promise!

As a side note: Lately I’ve been releasing two posts a week regularly on Mondays and Fridays. This might change due to my landing a new day job. I leave work later, which means I have less time in the afternoon/evening to work on blog material. I’m going to look into better lighting situations as well for taking chocolate pictures because of the sun going down earlier during the colder months (you might have noticed a lot of my photos have a blue-ish background due to low lighting). I’m going to release at least one post a week, though right now I’m not sure what the schedule will be. I’m going to have to embrace this new change in my day job as well as for the blog. Sit tight as I navigate these changes, but do not worry, I won’t be quitting this blog! It’s been a wonderful chocolate journey and a great hobby that will be very hard to let go of 🙂