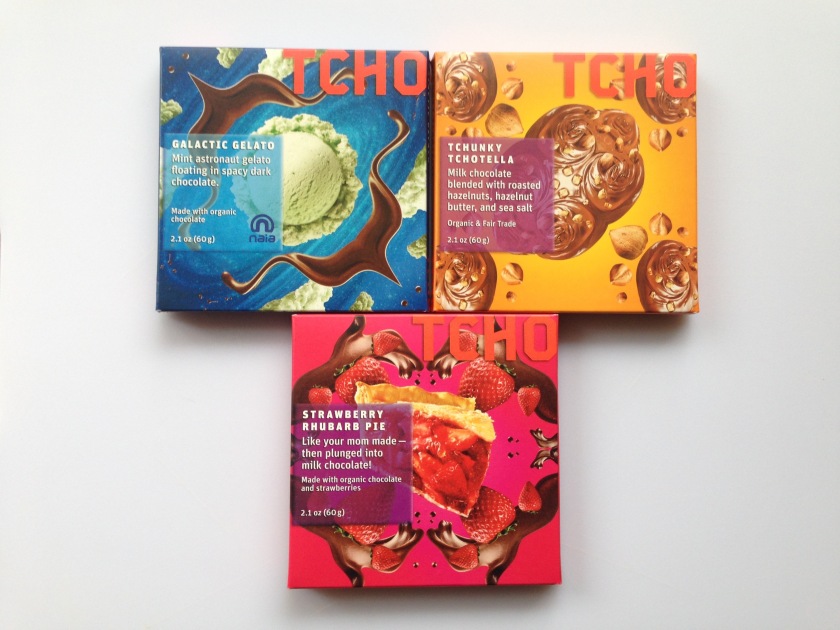 The first time I saw TCHO was while I was shopping at World Market, and recently I’ve been able to find them at my local Harris Teeter! I had seen on Instagram that they had several new bars out, and I was super excited to be able to get my hands on each of their TCHOPairings bars. Their packaging looked so unique and colorful, there was no way I could have missed seeing them 🙂

Each of the bars were protected in this modern-styled wrapper. 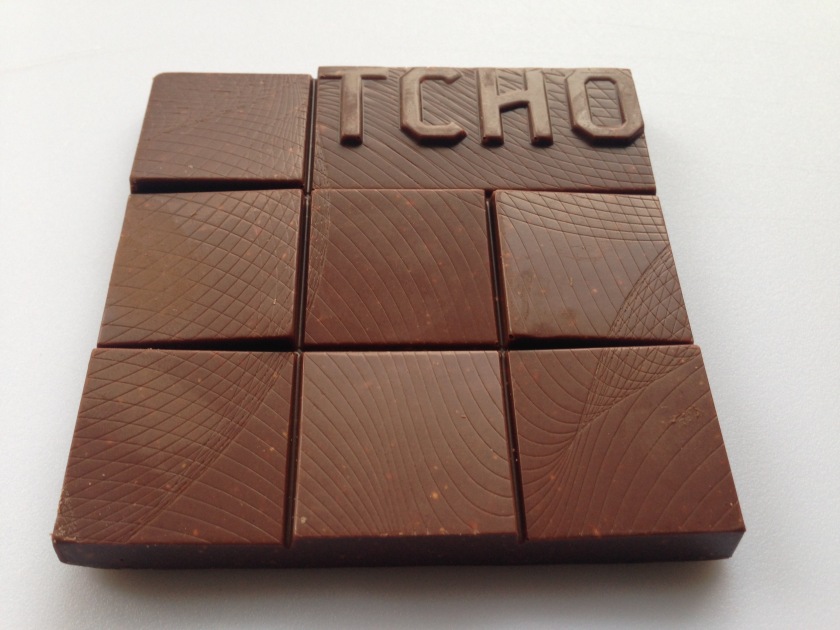 As usual for TCHO, the bar had an equally unique and modern shape. I think we need an art gallery to show off various styles and molds of chocolate bars since so many of them have unique patterns, textures and shapes that we should take the time to stop and admire. TCHO could go under the “modern art” section 😉 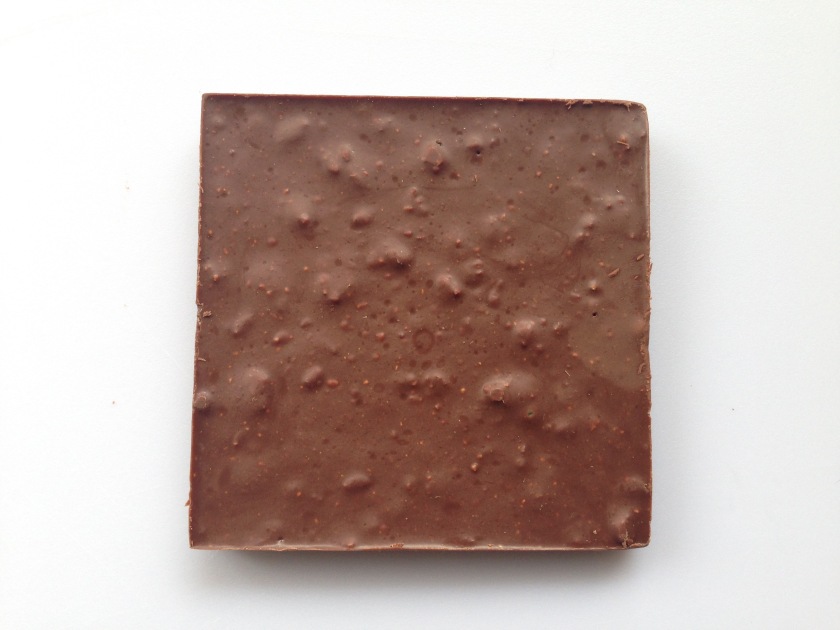 Strawberry Rhubarb Pie – “Like your mom made – then plunged into milk chocolate!”

This bar smelled just like strawberry rhubarb pie! My grandmother used to bake it for the holidays, so this brought my memories back to childhood 🙂 I immediately tasted tartness and a flood of strawberry rhubarb flavors including pie crust. Yes, pie crust is in the ingredients list. TCHO didn’t leave any part out! The pie crust and strawberry bits gave a crunchy texture. The tartness lingered in the aftertaste and I could taste more of the milk chocolate at the very end of my bite. Admittedly because of childhood memories bias and because I’m impressed that the pie crust was included in this bar, this was my favorite out of the three TCHO bars 🙂 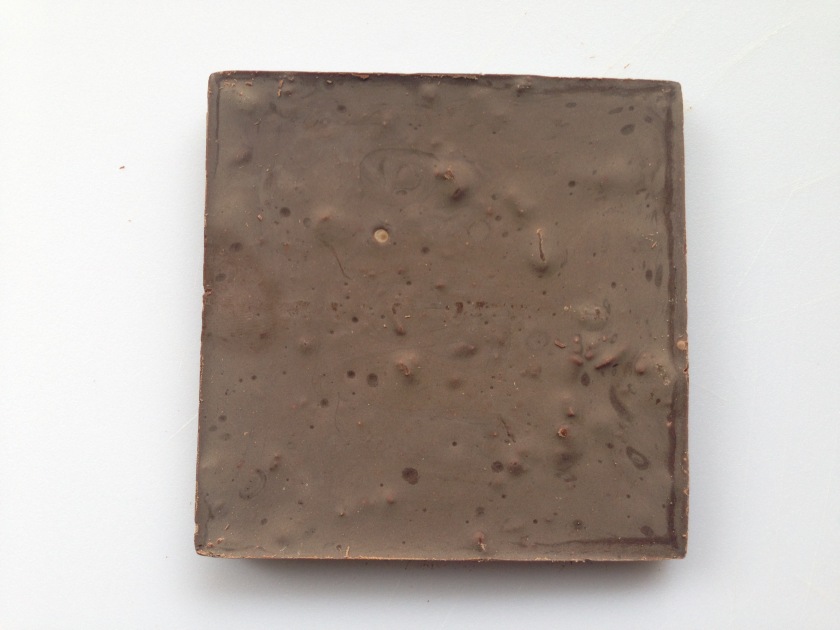 I have an addiction to gelato (besides chocolate), so this bar called out my name 😉 Confession time: I had relatively recently eaten an entire container of Talenti mint chocolate chip gelato. I was having a rough week :/ This bar? Tastes very much like that gelato minus the chilled temperature! The bar smelled slightly acidic and minty. (I’m not sure why so many dark chocolate bars smell acidic to me…) It also tasted a little acidic but minty. The flavors stayed the same for me throughout my bite and the bar was bit crunchy from minty pieces floating around in it. I think the flavor combination also reminds me of those mint Girl Scout cookies. 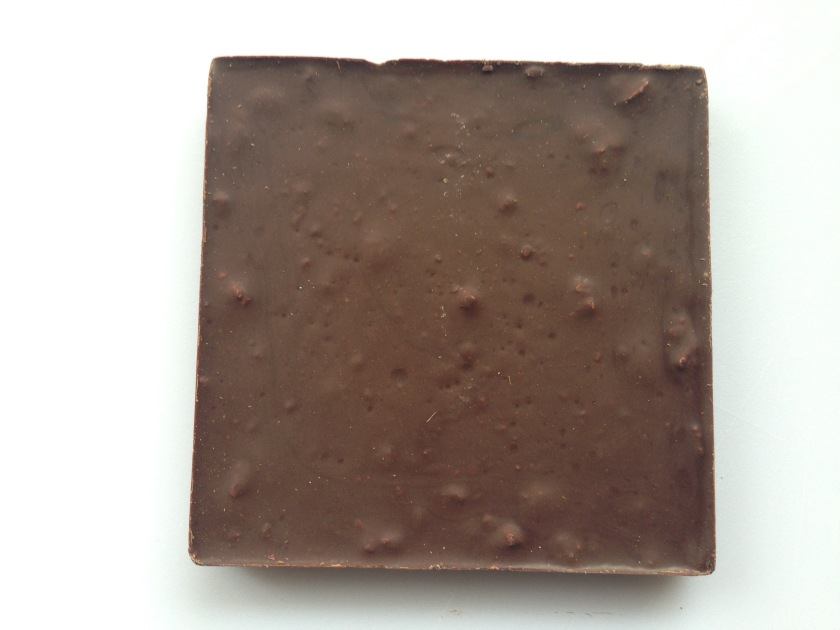 Is “Tchotella” supposed to be like Nutella? Chunky Nutella?! It smelled a little bit like hazelnut. My first bite took a while to melt, but then I was able to taste the sea salt first, followed by the hazelnut butter. Then I got a combination of the nutty, butter and sea salt flavors. The combination reminded me more of butterscotch. There were crunchy bits of hazelnut and what seemed to be crystallized bits of hazelnut butter. The aftertaste was like butterscotch.

All three bars were pretty unique, especially strawberry rhubarb pie! I would definitely get that one again!

TCHO: Made in Berkeley, CA