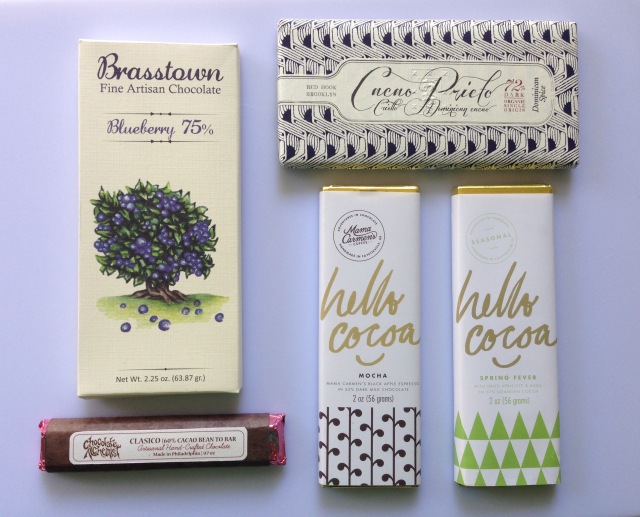 I love chocolate made in Europe, and for the longest time I thought that was the best stuff. I still do enjoy and rave about chocolate from the Netherlands, Germany, Japan and other places. But America has clearly been making noise in the chocolate world and teaching all those other countries that we have some weight to pull too. Unfortunately as Americans we still have the stigmatism that we only eat Hershey’s. I’m sure other fellow chocoholics and more adventurous chocolate consumers have been struggling to get their fellow coworkers, family and friends to “come to the dark side” (as I like to say) and branch out to craft chocolate or other brands that don’t cost $1 a bar. I hope we can continue to gently persuade others who haven’t made the dive yet learn that there is much more available within our own country that is worth trying! 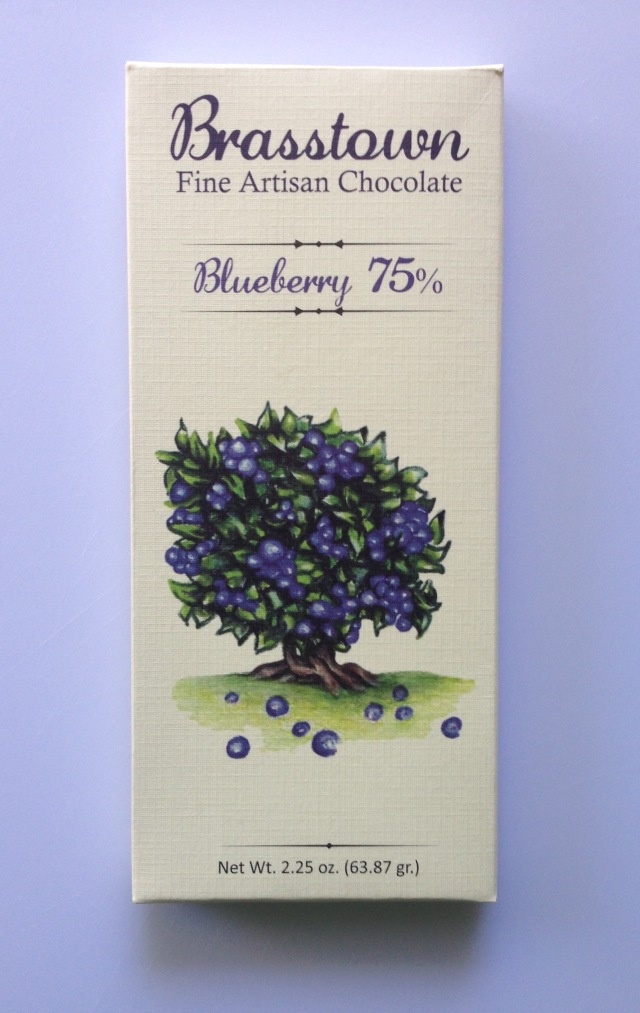 Though I’m born and brought up in New Jersey, had lived in Richmond, VA, for a few years and never understood the ways of “the South” (and still don’t), there is something simple yet comforting that just seems… southern. Like what you’d expect. And for some reason I get that warm southern feeling just by looking at the packaging of Brasstown. The box itself has texture to it and the picture on the front is simple yet nice to look at. It reminds me of a painting that I would see on the wall of a kitchen. 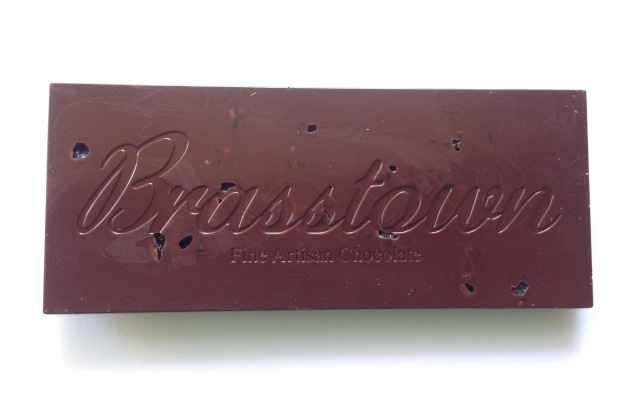 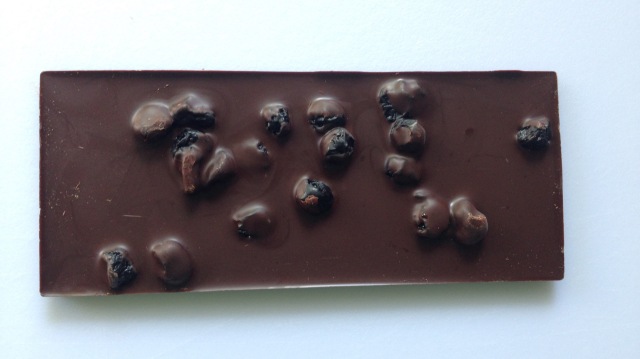 The chocolate looks beautiful! And I love it I can see the inclusions from the outside. I was attracted to this bar because it had blueberry in it. I think blueberries in chocolate bars aren’t as common as they could be (compared to almonds, sea salt, raspberry, etc.) and it makes me sad because I think that blueberries + dark chocolate make a great combination.

I first tried a piece of the chocolate bar that did not include any blueberries in it. The chocolate hard a sharp snap when broken apart, and the texture was very smooth. I detected fruity notes as well a little bit of acidity, but it was very slight acidic in flavor. That’s the kind of acidity I personally prefer and can enjoy! I next tried a bite with the blueberries. The blueberries had a light chewy texture and their sweetness and tartness helped balance out any of the little acidic flavor there was in the dark chocolate. Very nice balance and combination!

Brasstown: Made in Brasstown, NC

My most recent trip to Philadelphia was a couple of years ago, and I’m sad I didn’t know about Chocolate Alchemist until now!!! I found out from their story on their website that a married couple are in charge of a local restaurant in the area and Chocolate Alchemist. My impression after reading their story is that Robert, who is the main force behind Chocolate Alchemist, is very outspoken in telling people there is a big difference between craft chocolate and “crap.” 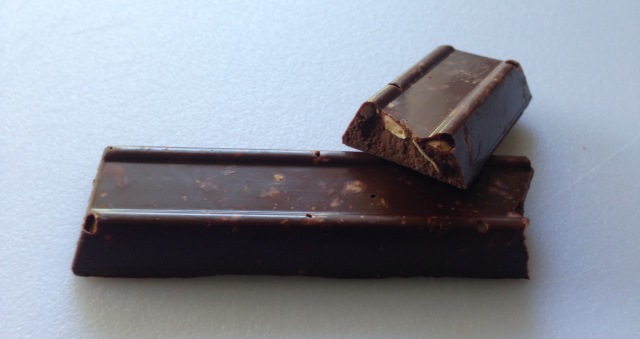 I have to say, this piece of chocolate is very small from what I’m used to. And because I was sharing it with my boyfriend, it was gone in an instant! This chocolate was lighter in flavor since it was made with milk, and the chocolate practically melted away in my mouth. The coconut and hazelnuts in the chocolate added some nice light, crunchy texture. My boyfriend said his bite consisted of mainly hazelnut, which made it hard for him to detect the chocolate flavors alone, but he enjoyed the chocolate nonetheless. I really like hazelnuts, so I wasn’t bothered by that 😉

Chocolate Alchemist: Made in Philadelphia, PA 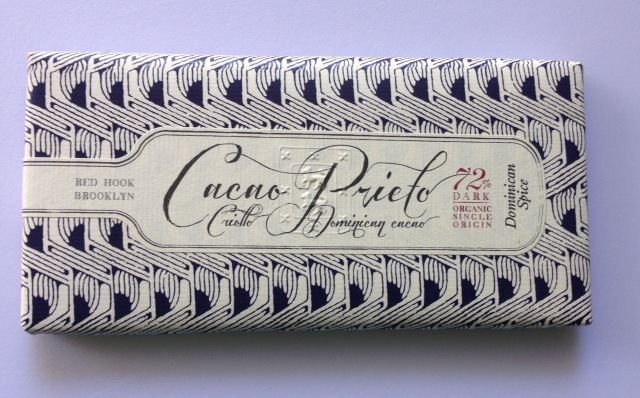 Cacao Prieto uses beans from Dominican Republic to make all of their chocolate. Because I’ve visited a small cacao farm in D.R. before, I was especially excited to try their chocolate! I tried their Dominican Spice bar because it has a unique combination using cloves, cassia, nutmeg and cardamom for the spiciness. 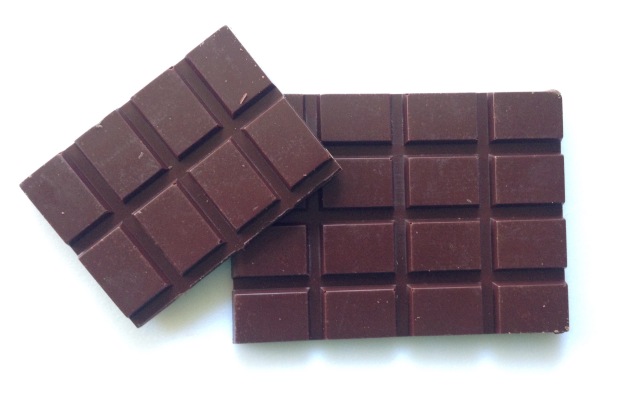 I really enjoyed admiring the crisp, clean lines of the chocolate itself, and the chocolate gave a sharp snap when broken apart. I could immediately detect the spicy flavors in the first bite. Usually I’m not into spicy (especially “hot spicy”) chocolate, but this is a very nice effect where your mouth isn’t burning at all. My boyfriend is totally fine with hot spicy bars, but he also really enjoyed the unique spice combination here. I really liked this bar!!! I’m also a fan now of Cacao Prieto 🙂

I hope to some day try their spiced hot chocolate when the seasons turn chilly again.

Cacao Prieto: Made in Brooklyn, NY 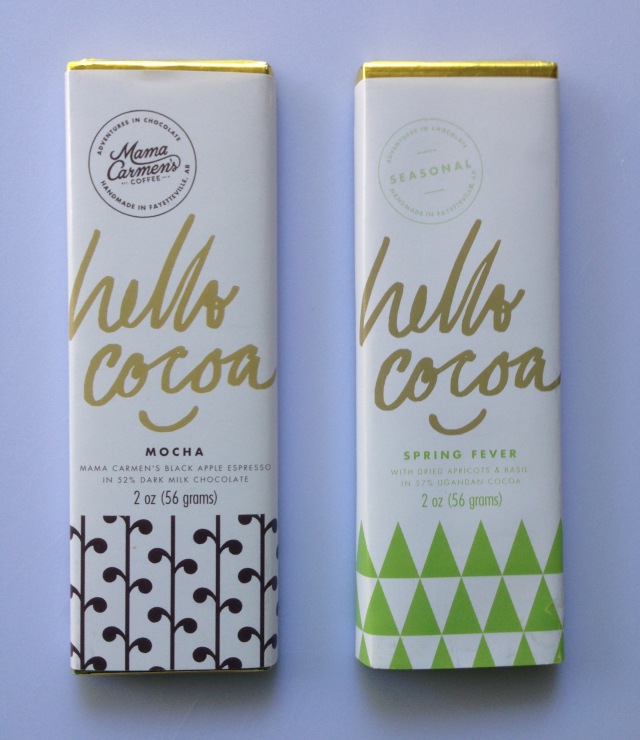 One thing that drew me to Hello Cocoa (despite their having a table set up at the D.C. Chocolate Festival) was that that the guy manning the table (sadly I have forgotten his name) had a huge smile on his face and we very personable. My boyfriend and I were amazed that he would travel from as far as Arkansas to share Hello Cocoa. What dedication! Hello Cocoa’s website tells that story of three couples who started Hello Cocoa as a way to introduce chocolate lovers and the like to other “friends, lifestyles, cultures & landscapes around the world. And it all starts with a simple greeting, hello.”

I love the cute, simple style of their wrappers and layout for chocolate break points. I had to grab a Spring Fever bar by them because my boyfriend and I sampled a piece and were really intrigued. Apricot and basil in chocolate??? I’ve heard that herbs are difficult to work with in chocolate, and Hello Cocoa did an awesome job with the basil! In my first bite I first tasted the chewy sweetness of the dried apricots, followed by basil and then the dark chocolate hanging out in the background. The longer I chewed on my piece, the stronger the basil grew in flavor. But it was never overwhelming. I think the apricot was a really nice touch to balance the “herbiness” and earthiness of the dark chocolate.

According to the mocha bar, it contains “Mama Carmen’s Black Apple Espresso.” Though I couldn’t detect any apple flavors, I definitely smelled and tasted espresso in the chocolate! The flavor and scent was warming and made me feel like I was sitting at my favorite small local coffee shop. The grittiness of the coffee was balanced by the smooth and slight creaminess of the dark milk chocolate. I’ve basically fallen in love with all of the chocolate bars I’ve tried here 🙂  I personally think that coffee and chocolate make a great pairing and Hello Cocoa made an awesome marriage of the two. As an added note, I had some coworkers try this chocolate, and all of them liked it as well.

Hello Cocoa: Made in Fayetteville, AR

7 thoughts on “Other Chocolates Made in North America”

© Time To Eat Chocolate 2016. Unauthorized use and/or duplication of this material without express and written permission from this site’s author and/or owner is strictly prohibited. Excerpts and links may be used, provided that full and clear credit is given to Time To Eat Chocolate with appropriate and specific direction to the original content.
Loading Comments...
Comment
×
%d bloggers like this: