I was browsing an Asian grocery store and stumbled upon some German chocolate of all things! I rarely ever find Milka’s raspberry cream or dark chocolate bars, so I knew I had to get some to share on here and let people know that they exist 🙂 I also grabbed some Kinder as well, but that will come later. 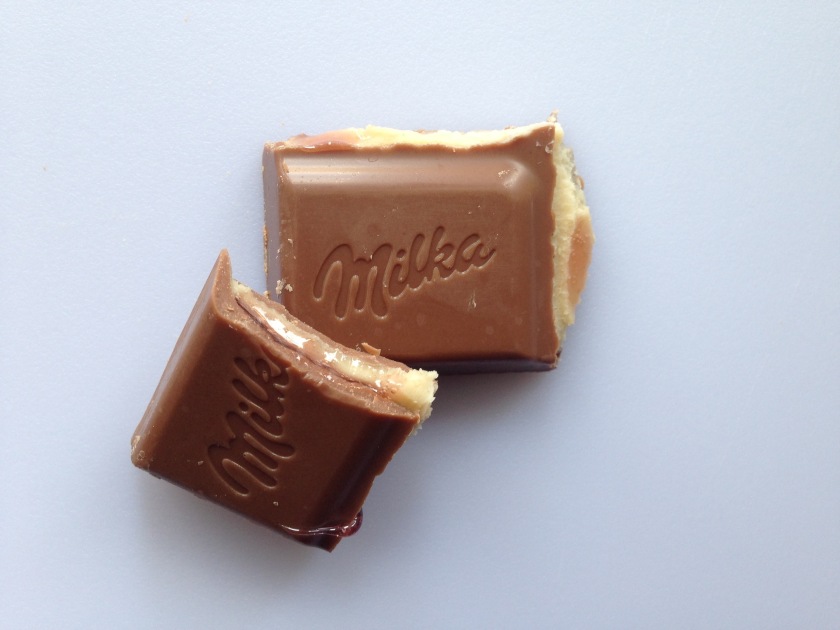 I tried to take a picture that lets you see the layer of raspberry in the bar. It’s sticky, gooey and very raspberry! Once I opened the wrapper it was like a wall of sweetness hit my face. The raspberry layer is like a smooth syrup placed on top of the layer of sugary cream. The bar as a whole is very sweet and light. This could go onto a piece of toast for breakfast 😀

Usually I see milk chocolate Milka bars, but I knew that at one point I had seen a dark chocolate bar by them, which is why I’m glad I was able to finally find and share one here 🙂 The dark chocolate is smooth and a little sweeter than most dark chocolates but I don’t mind that at all. The aftertaste reminds me of the advent calendar chocolate I had as a kid that my grandmother (we called her “Oma,” shorter word for großmutter) would send us straight from Germany. I can’t find the words to describe that aftertaste right now, but it simply reminds me of my childhood and the German chocolate we tried back then. This bar is one where I could actually eat the whole thing in one sitting, and that’s rare for me to say about dark chocolate 🙂

Now for the Kinder bar!!! I think I had found these originally at World Market or maybe it was For the Love of Chocolate. But I remember they were great for traveling and to eat in between running errands.

Creamy is simply how I’d describe this chocolate. The milk chocolate forms this harder shell around a sweet, creamy center. It’s yummy and addictive 🙂 Honestly, it’s taking a lot of willpower to not eat the whole box in one sitting 😉

All of these chocolates I would recommend! There’s a reason why Milka and Kinder have stuck around for so long 🙂

Milka: Made in Germany

Kinder: Umm… so the back of the bar has no English on it. I can speak and read some German, but there’s not even German on the back, which I’m kind of surprised by. In my last Kinder post the bar I tried said it was made in Poland.

So this part is being added at a later time from when I originally wrote this post because my mom had sent me this big bar of Milka Bubbly Caramel in the mail!!!

Sadly it got a bit crushed while it was being mailed to me.

Because of the air pockets in the chocolate, the texture reminded me of Nestle’s Aero bar. It made the chocolate seem lighter in density than usual, which is nice because then this chocolate can be enjoyed without feeling much guilt from eating a lot of it 😉 The caramel added extra sweetness and it’s consistency was very runny, adding to the overall “lightness” of this chocolate. If you like caramel and milk chocolate, I definitely recommend this 🙂