Chocolate Is Good For You

I visited Max Brenner for the first time a couple of years ago with a friend. We mainly went there for their hot chocolate, but I would always ended up getting some of their bonbons to-go XD I recently went again with my friend to Max Brenner and this time I knew I had to pay better attention to the flavors I experienced.

Let me start talking about the hot chocolate…

It’s thick and fills you up like real hot chocolate should! It’s pretty rich so you are forced to really savor it and think about the flavors, as oppose to when you’re drinking watery, cheaper hot chocolate.

I got salted caramel with milk chocolate the first time I went to Max Brenner a couple of years ago, so I decided to try it again. My friend chose a dark chocolate hot chocolate with vanilla cream.

I was pretty happy that my salted caramel came with whipped cream on top XD There’s something about whipped cream that makes you super excited! The hot chocolate was creamy and sweet with milk chocolate flavoring, caramel and whipped cream. I could taste the salt crystals floating around in it… though the salt was the only downside to this drink. As I was trying to finish my hot chocolate, it started to get way too salty for my taste. I guess all the leftover salt settled to the bottom of my cup 🙁 I didn’t recall the salted caramel hot chocolate being THIS salty when I first tried it, so I’m guessing whoever prepared it put too much salt into it.

I liked my friend’s dark chocolate with vanilla cream better! She let me finish her drink as she became too full to finish it. It was richer in taste than the salted caramel in milk chocolate. The dark chocolate wasn’t bitter, but very smooth. The creamy vanilla notes were hiding amidst the dark chocolate flavors. I had to really take my time with this drink because with dark chocolate, I feel like I’m forced to slow down rather than inhale it XD

I had tried a couple of bonbons from Max Brenner in the past, but before leaving the store I figured this time I needed to get a box. 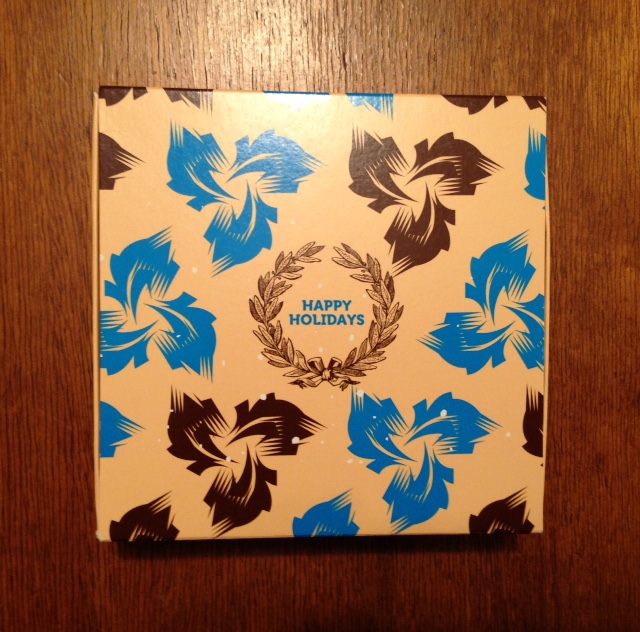 Due to the upcoming holidays, Max Brenner already had decorative boxes pre-filled with bonbons on their shelves. I was debating between getting a pre-filled box or picking out my own. A helpful associate there suggested that I pick my own 🙂

All of the bonbons in the store looked so pretty, and it was hard to choose which ones to get while limiting myself to only 9 choices!

What’s nifty is that the guide uses the designs on top of the bonbons to help you determine which is which.

I picked this out because the associate who helped me recommended it, and the combination sounded interesting 🙂 First bite, and I immediately noticed how smooth the texture of the chocolate was. I next tasted the dulce de leche flavors and the whiskey seemed to float in the background. This was a great marriage of flavors, and not one that I would have expected to like! I’m not a whiskey drinker nor am I a huge fan of whiskey flavors, so this was surprisingly very, very pleasant!

The flavors of this reminded me of those chocolate oranges that I had written about earlier. It had the same earthy dark chocolate taste with the orange flavors just popping out, forcing you to notice its presence. I think this bonbon and the chocolate orange tasted about the same. Maybe some fall spices would be nice to throw into there, like cinnamon and nutmeg or something 🙂 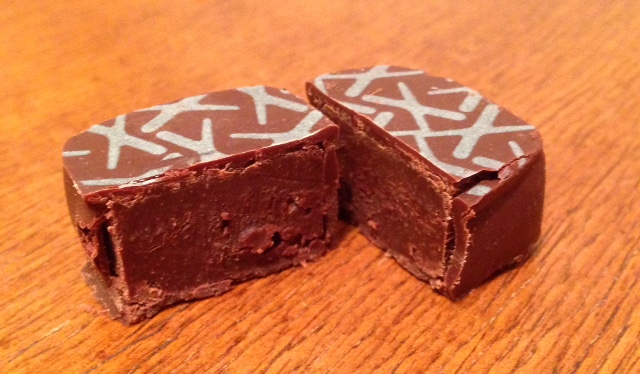 At first when I started chewing this bonbon, I barely tasted the spices. But over time the spice flavors started to grow and become more obvious. I’m awful at picking out what spices are in chocolate during chocolate tastings, so I’m not going to bother guessing what Max Brenner might have used 😛 To me this seems fine on its own, but maybe the flavors here could be combined with the dark chocolate cream with orange! 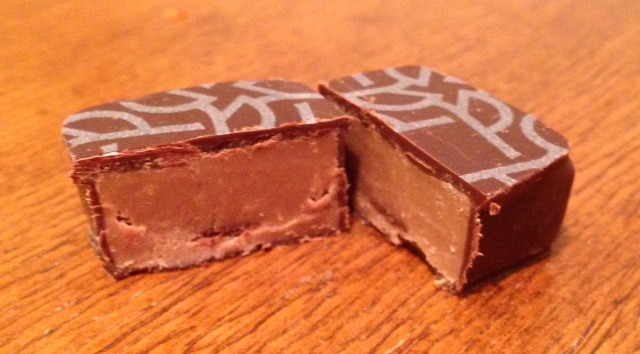 For the life of me I can’t remember what flavor this was supposed to be. I was looking over the pamphlet I got with the box, and I couldn’t find its design anywhere! On the outside it’s a dark chocolate. In the picture you can see it has a light ganache inside… I want to say that this is dark chocolate with hazelnut ganache. At there very least the ganache tastes pretty “nutty”…

This bonbon almost immediately melted in my mouth! The salt bits where the only substantial thing in this chocolate to remind me that I had actually eaten something XD The hazelnut ganache was so smooth and was the first immediate flavor. The salt came as like a secondary flavor as the crystals dissolved.

The mocha flavors blew up in my mouth during the first bite and then subsided into a stronger, smooth coffee flavor as the hazelnut melted away. If I could take my mocha drinks in the form of chocolate, I would want several of these XD Very delicious! 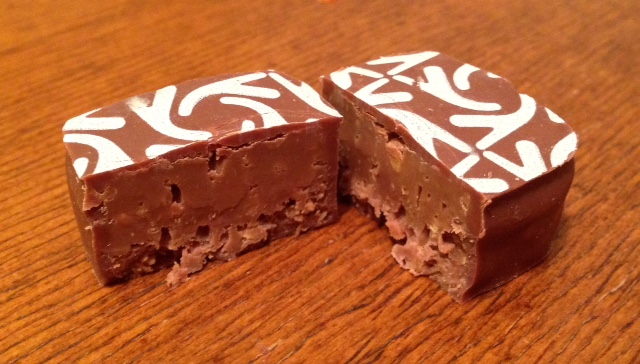 I immediately got the crunchy texture of coconut and felt the hazelnut cream melt away in my mouth before I actually tasted the coconut flavoring. It feels like a simple and pleasant combination 🙂

If I were to choose my favorite out of these, it’d be pretty hard! I was so impressed by realness of the milk chocolate with peanut butter. The hazelnut cream with mocha helped me picture myself chilling in a cafe and truly feeling relaxed. The hazelnut cream with sea salt just disappeared in my mouth. And the dark chocolate with dulce de leche and whiskey was a surprising and very nice combination! I guess those were the ones that really stuck with me 🙂